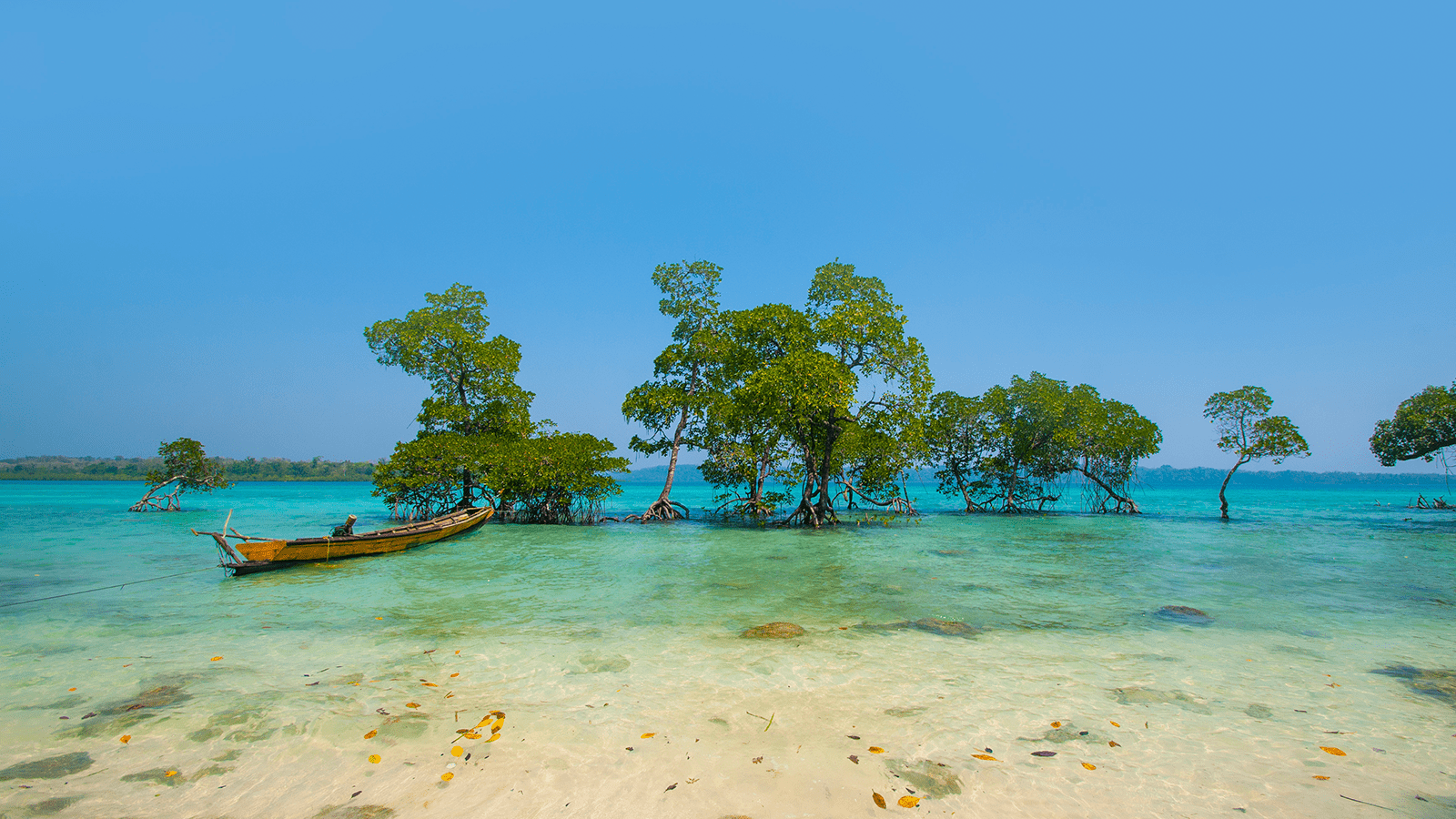 Andaman & Nicobar consists of over 500 islands forming a part of a single archipelago with rich topography and geographical history. The islands were formed when the Indian and Burmese plates collided leading to an opening in the back-arc basin about 4 million years ago.

Archaeological evidence suggests inhabitants dating back to 2,200 years. However, cultural and genetic studies suggest that the aboriginals might have separated from other populations during the Middle Paleolithic age, dating back to 30,000 years. Since then they have diversified into different groups having their own culture and code of conduct. The Jarawas are the perfect example for a tribe that has existed from time immemorial, away from human settlements, gathering fruits, hunting in the sea and forests for their survival, wearing animal clads for protecting their skin. They stand out for their bright red attires and can be seen standing along the sides of the road watching the teeming vehicles run past them. The tribe exists outside the modern world as they live deep inside their ecosystems with zero carbon footprints. Andaman Trunk Road has been constructed right through the middle of their settlements making it easy for a load of jeeps and buses to pass through. Though it may seem fascinating to see people who are very different from the ones we come across in our everyday lives, it is to be noted that these are also human beings who do not need to be treated as showpieces in a zoo. The developmental authorities have turned a blind eye to the ongoing protests of environmentalists, anthropologists, and the Jarawas
themselves. They are hostile towards outsiders as there has been a huge decrease in forest reserves through the interference of the general population and have seen a decline in their own numbers due to diseases being spread in an otherwise healthy community that is untainted by artificial surroundings and inorganic food intake.

Besides its rich cultural history, Andamans is one of the most unexplored portions of the Indian subcontinent with respect to its flora & fauna, and its rich indelible life along the sea bed. Owing to an absence of tourism traffic and heavy commercial fishing, the islands promise quiet serenity amidst white sandy beaches, swaying palm trees, and baby blue waters teeming with exotic marine life. It is a global hotspot for endemic species of birds that have migrated and adapted themselves to its tropical surroundings through a span of thousands of years. Coral reefs stretch over an area of about 11,000 sq km and make up for beautifully laid out hues of colors booming with life underwater. Different species of octopuses, squids, and oysters can be found moving beside these corals. Endangered species like the whale shark, dugong, and dolphins can also be found in these waters. If you are lucky enough, you might just spot these water animals on your next expedition!

Veer Savarkar International Airport located 2 km south of Port Blair is the main airport of Andaman & Nicobar Islands. It is the main mode of transportation for people visiting the islands from other parts of India and regions worldwide. It has good connectivity with Havelock and Neil as well, with all the major resorts and hotels facilitating cabs that take its guests to the airport for departure. With the onset of the new integrated terminal building that is to be completed by June 2022 as per AIA or Airport Authority of India, the director of the airport, Jameel Khaliq has promised better connectivity and operational procedures. The terminal building aims to boost UDAN (Ude Deshka Aam Nagrik) and enhance its connectivity to under-served airports of the country.

The building is being constructed in the shape of a shell which highlights the rich marine life of Andamans, beautifying it with glossy seashells found on the beaches here. The building is to have three floors with the roof varying between 18 m and 32 m. Built-in a total area of 40,000 sqm, it will be able to handle 1,200 passengers at a time, 600 domestic passengers, and 600 international passengers. Spread across three floors, one floor would be used for departure and service area, while the others would be used as an access point for the terminal building and the arrival of passengers, integrated with a waiting area for the international passengers.

In addition, there are 10 elevators, 6 escalators, 4 aerobridges, 28 check-in counters, an in-line scan system for baggage handling, 3 belts for the arriving baggage, 1 for international and 2 for domestic that are to be separated by a sliding glass partition.

The terminal features tickets & transfers made seamless through ease of movement to the respective departure gates, hassle-free check-in, and minimum queuing. The passengers may take a rest in the waiting areas or stroll around to explore the shopping arena. Skylights will be installed on the roof which would emanate a hundred percent natural lighting throughout the day (12 hours).

The terminal is to boost revenues by introducing the best travel solutions and bringing about new employment opportunities for the islanders. The UDAN scheme has caught the attention of start-up airlines and leading domestic carriers due to certain fiscal and monetary incentives. They would be given exclusive rights to operate on the allotted Regional Connectivity Scheme (RCS) routes for a period of three years.

The terminal building is being constructed in full swing at an estimated cost of Rs 417 crore.It is believed that about 83 percent of construction has been completed. Hopefully, we will witness the inauguration of the terminal within the tentative period of four months from now and welcome a huge surge of incoming tourists to this beautiful island destination offering better comfort and ease of travel.